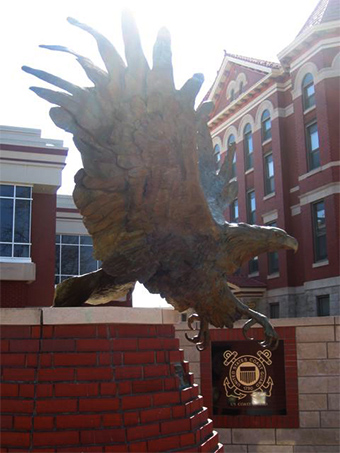 Birth of a Plan

Like freedom itself, Butler County’s Celebration of Freedom Memorial was not free. Citizens and businesses of Butler County as well as former citizens now residing all over the country responded vigorously and generously to the campaign for funds.

The movement actually began in 1999 over coffee between State Representative Bill Mason and World War II Veteran Howard Cool. “Honoring veterans and promoting patriotism had been going through my head for some time,” says Mason, who retired in 2004 after serving Butler County citizens in the State Legislature for 12 years. “I wanted to run the thought of ‘a memorial’ by a veteran, someone who had a strong love of our nation.” Cool latched on to the idea with enthusiasm: “I’ll make the first contribution,” he said.

Mason’s dream was born out of his personal dismay over the direction the nation was going, specifically an attitude of people taking our freedom for granted, a lack of concern for the sacrifices of service men and women who have paid the ultimate price for that freedom. “Americans seemed more interested in social issues than patriotism,” he said.

A year prior to his conversation with Cool, Mason had already created a Celebration of Freedom committee through the El Dorado Chamber of Commerce. This group, he reasoned, would be the ideal vehicle through which to implement the memorial project.

In addition to that support he found with this group, Mason was hearing, “You can count on me,” from nearly everyone he spoke to about the plan. Frank Wise, an art instructor at El Dorado High School, drew up a rendition of the hoped-for structure. The El Dorado Prairie Port Festival Organization made a generous financial contribution. About $10,000 was raised from interested citizens. Then, distracted by other commitments, the effort stopped.

Mason didn’t forget. In the spring of 2002, he approached an enthusiastic, proven community servant and successful fundraiser for many other local projects, Lou Clennan. Within a week it was obvious El Dorado’s freedom memorial was under the influence of a second wind.

Clennan enlisted the help of Barbara Dankert, Denice Morris, and Janice Shaffer, and “a campaign for funds” was launched by March. The memorial would be financed by sponsorships as well as the sale of engraved bricks and benches purchased in memory of service men and women. Another decision was to include “those who served on the home front” because they were so key to the success of World War II. (As it turned out, many non-veterans, citizens and organizations who believed in and supported the project, donated dollars).

Next, the committee established a funding goal of $80,000 and set the dedication for November 2002, as part of the already established Celebration of Freedom Week activities. Letters were mailed to the membership list of every organization they could find; advertisements and news stories were published in The El Dorado Times as well as the Augusta and Andover newspapers; presentations were made to groups all over Butler County; tickets were sold to a USO show in downtown El Dorado. By July (2002), enough funds were raised to begin making some tangible decisions.

Location. Yet to be determined was the memorial’s location. There were several suggestions by the public and strong differences of opinion on the subject. Options had narrowed to the train depot where most World War II servicemen departed for duty, or the Butler County Court House where service men and women registered for military service. After months of debate, the east lawn of the court house lawn—opposite the Statue of Liberty on the west lawn—was selected.

Design Elements. Dick Morris, responsible for the overall design, made connections to purchase a cast bronze eagle created by widely-acclaimed sculptor Sandy Scott. Entitled “Sovereign Wings,” the eagle would be poised majestically on top of a brick and limestone base and would function as the memorial’s centerpiece.

A plan by Architect Vince Haines balanced the eagle focal point (on the east lawn) with the Statue of Liberty (on the west lawn). The memorial walk would be made up of granite panels on which would be engraved the names of persons honored.

A “Signers Panel,” introduced by Clifford Stone, would be placed at the memorial’s entryway. Stone’s thought—that freedom began with the signing of the Declaration of Independence—was implemented in a panel placed at the base of the flag pole. The inscription below the 56 names listed: OUR FREEDOM BEGAN WHEN IN 1776 THESE COURAGEOUS MEN SIGNED THE DECLARATION OF INDEPENDENCE.

The flag pole, raised in 1955 on the east court house lawn by the Fred Priestley Post 1174 of the VFW and dedicated to veterans who “valorously defended the flag it bears,” would be moved to the memorial entrance. In this new location, the pole could be incorporated into the “Signers Panel” at the memorial entrance, and the American flag made more visible.

World War II Veteran Howard Cool consented to assume the responsibility of Construction Superintendent, a huge task given the number of design changes required as more and more names were added for engraving on the memorial walk, which finally took on a “hop-scotch” pattern.

By Dedication Day (November 24, 2002), over $110,000 had been raised, a great portion coming from the purchase of individual markers to honor loved ones or friends. It turned out to be one of the coldest days of winter, with a wind chill of below zero. But people came in hoards to mark the occasion, to bear witness that those who put their lives on the line for the preservation of freedom are “not forgotten.”

For Bill Mason and Howard Cool and all of those who so wholeheartedly supported the freedom memorial project, no element planned for the dedication ceremony itself was as significant as seeing those hundreds of citizens walk slowly down the memorial walk, examining the names, pondering the action of those living and dead who served so selflessly.

In addition to the purchase of individual bricks, eagle sponsorships, and benches, in-kind services provided by individuals and businesses, were invaluable in creating the memorial. Money continued to dribble in until August 2003. On that date, totals were: Dollars raised—$127.258.20; Bricks Sold—901; Eagle Sponsors—24; Benches—12. 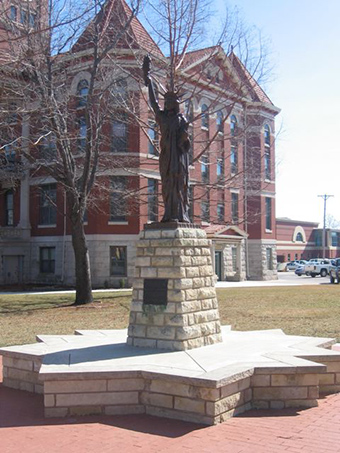 While working on the Eagle side of the memorial, there was discussion about expanding the project to include Miss Liberty, on the west lawn of the court house. The original drawing by Architect Vince Haines had included a sidewalk—possibly another memorial walkway?—leading to this statue.

Now in poor condition and mounted on a crumbling foundation, Miss Liberty had been originally installed on the court house lawn on Flag Day, June 14, 1950. El Dorado’s own Clarence Kerns was a Boy Scout leader in El Dorado at the time and participated in the ceremony.

“The ‘Miss Liberty replica’ was part of a nationwide project of the Boy Scouts of America,” says Kerns. “Over 200 of the replicas were dedicated nationwide between 1949 and 1951. They were gifts to towns from the Boy Scouts to celebrate their 40th anniversary theme, ‘Strengthen the Arm of Liberty.’”

By 1988, however, because this original statue had deteriorated so badly, it was replaced by one provided by Texaco Refinery. The original statue thus became the property of the Butler County Historical Museum.

Sometime in 2003, Howard and Barbara Redburn (formerly of El Dorado and now living in Wichita) talked with museum officials about the possibility of restoring El Dorado’s original Miss Liberty statue.

Encouraged by the Redburns’ decision to renovate the monument, that very summer Dick Morris obtained permission of the Butler County Commissioners to launch a campaign to incorporate the refurbishing of the statue and its base with the veterans memorial located on the east lawn of the court house. Once restored, the Miss Liberty monument along with the installation of yet another memorial walk, would complete Butler County’s Freedom Memorial which had been dedicated in November 2002.

To help with the project, Dick Morris enlisted the aid of the Fund Raising Committee—Clennan, Dankert, Morris, and Shaffer—as well as Construction Superintendent Cool. Requests to buy bricks and benches had continued to pour it, and this was an opportunity that could not be ignored.

The challenge of the west sidewalk was the number of trees which fill the west lawn. In order to tie the new walk with the Eagle side, it needed to coordinate in style with the east walk. It was finally decided to build a more narrow walk, make smaller panels, but maintain the “hop scotch” pattern developed on the west side.

With a goal of $40,000, the Fundraising committee again went to work offering bricks, benches, and sponsorships. Again, the response was overwhelming. Because of the generous acts of in-kind donations, Howard Cool as Construction Superintendent, assistance once more by the inmates at the El Dorado Correctional Facility, and the Redburns’ great heartedness in restoring the statue, the cost of the project was much less than the dollars raised: $38,178.06

The Re-Dedication of Miss Liberty, took place at the Butler County Court House on Flag Day, June 14, 2004. Project Chairman Dick Morris served as Master of Ceremonies. Patriotic music by the El Dorado City Band rang out. Flags and free hot dogs were distributed. The colors were hoisted. Miss Liberty was unveiled by Redburn and Cool. The El Dorado Elks, the Boy Scouts, the VFW and American Legion organizations, and an overwhelming number of Butler County citizens were present.

“Since additional funds are in place, the idea of building a web site that would be accessible to the public could become a reality,” says Clennan, who remains in her position as Fund Raising Committee Chair. “Photographs of and biographical information about those veterans whose names are engraved on the sidewalk could be made available to the public via the internet.”

Thanks to the initial efforts by Dan McCoy and the final design and set up by Jason Adams of Jason Adams Designs in Kansas City, the web site has become a reality.

Anyone interested in purchasing a brick in memory of, or in honor of, a veteran or current member of our Armed Forces may still do so. For more information, see “FAQ” or “Contact” links at this site.