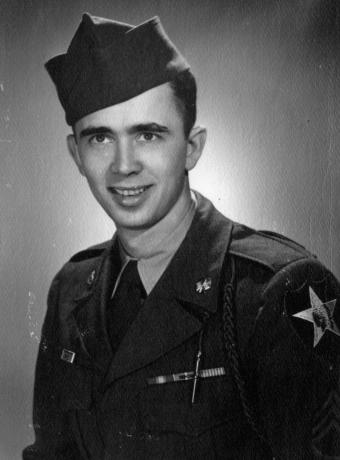 Gary joined the U.S. Army on 17 May 1951.  He served as a Forward Observer in a 155 millimeter Howitzer Unit for 15 months during the Korean War.

Gary re-enlisted in the Army in March 1961. He then served as a Hawk Missile Radar Technician until 26 October 1966, when he was appointed Chief Warrant Officer (CWO) as a Missile System Technician.

He served one tour (3 years) in Germany as a Radar Technician with the rank of Sergeant First Class (SFC).

Then later, Gary spent a one-year tour in Germany and two tours (one year each) in Korea as a Warrant Officer.

In all, Gary had 20 years of active duty service.

He was awarded three Bronze Stars on his Korean Service Medals.

See Awards section for other awards.

He also served during the Vietnam War.

He fought in the Korean War; he was a Forward Observer and later, Maintenance Officer for an Air Defense Missiles System.