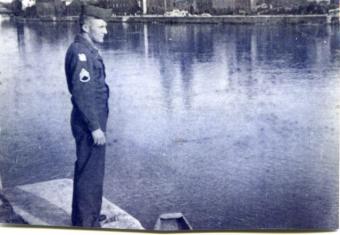 Staff Sergeant Edward F. Wilson entered the United States Army at Ft. Leavenworth, KS, on 26 September 1940, at the age of 23.  From the time of his enlistment until the attack of Pearl Harbor, he served with Company G, 17th Infantry Regiment, 7th Infantry Division in California.

With the onset of World War II, he was assigned to Company G, 30th Infantry Regiment, 3rd Infantry Division.  This would be his unit of assignment until the end of the war in Europe.

In October, 1942, Ed began his combat service with the landings of Operation Torch in French Morocco.  He fought throughout the Algeria-Tunisia Campaign and was present at both the Battle of Kasserine Pass and the Axis surrender in May 1943, Tunis.

During July/August, 1943, through the end of the war, Ed fought his way, along with his unit, up the length of Italy.  During the period of 9 - 19 September 1943, he fought in the Battle of Salerno.  Ed fought through all aspects of the Naples-Foggia and Rome-Arno campaigns.

On 12 October 12 1943, he was wounded for the first time while involved in the fight to cross the Volturno River.  On 22 January 22 1944, Ed landed with his unit on the beaches of Anzio and fought in the Italian campaign’s most costly battle for that city.  After Anzio, Ed fought through Italy, and was at the assaults to take Monti-Casino.

During his service in World War II, Ed was awarded the following decorations:

•  The Silver Star for conspicuous gallantry

After the war in Europe ended, Ed was assigned as a Criminal Investigator with the 11th Constabulary Group in the Army of Occupation in Germany.  During 1946, Ed served as a guard for the Nuremberg War Crimes Trial and was one of the personal guards for Herman Goering.

Upon Ed’s return to the states in May 1947, he was assigned to the Washington Military District, Washington D.C.

11th Constabulary Group in the Army of Occupation in Germany, after the war.