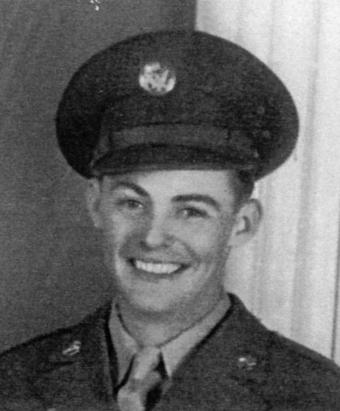 Melvin enlisted but before his name came up, he was drafted.

He took his basic training in Atlantic City, N. J.  They lived in a hotel on the sixth floor, did their marching on the Boardwalk, and were never allowed to use the elevators as part of their training.

From there, he was sent to Bradenton, FL, then on to Drew Field for radio school at Tampa, FL.  He was next sent to Camp Patrick Henry in Virginia and was shipped from there on the Liberty Ship, Henry W. Longfellow.

The ship took 22 days, zig zagging to avoid submarines, to get to Oran, Africa.

For about two months, he was in the area of the Mediterranean during the Sicily invasion.  Then he was back on board ship, took the Suez Canal to India and landed at Bombay.

From there, the group took a narrow gauge railroad to the northern part of India; there they set up air warning units.  This was about the time they first invented radar and Melvin said it didn’t work well.

Then he was on to Burma, where they were building the Burma Road.  His duty there was to help guard an air strip.  The unit was getting ready to go on into Japan when the war was over and he was sent home.

“October 2, 1945—We boarded the troop carrier USS General C. H. Muir and were headed for home.  Leaving Calcutta to Ceylon to Aden to Port Said, to Gibralter past the Azores, then on to New York.”

“November 1st—As I remember it was foggy and the air was much cooler than we had been used to in the jungles of Burma.  Everything looked the same, water was everywhere, same as yesterday.  As the fog cleared, we began to see a shore line, dark gray on the horizon.  Shapes began to appear as we got closer, and then there it was:  “The Statue of Liberty”. . .getting bigger and bigger.

“Things began to happen.  We were met by several tug boats draped with banners, flags, and girls cheering and shouting as bands played.  The tug boats were shooting water in the air in arches.  What a welcome. . .with the Statue in the mix.

“Many eyes were teary and we threw kisses at ‘the Lady.’  This Kansas boy was teary eyed too, for I had only seen the Statue of Liberty in pictures and read about her in books.  She was everything I had imagined, standing tall and with that torch in her hand, she was indeed saying welcome to our shores.

“That day, she was talking to us:

Melvin was discharged from the Air Force in a camp there in New York.

He arrived home on November 7, 1945, and one week later, on November 14, was married to Opal Louise Clark of El Dorado.

Melvin was the son of Arlie and Mertie Wilcox Redburn of El Dorado.