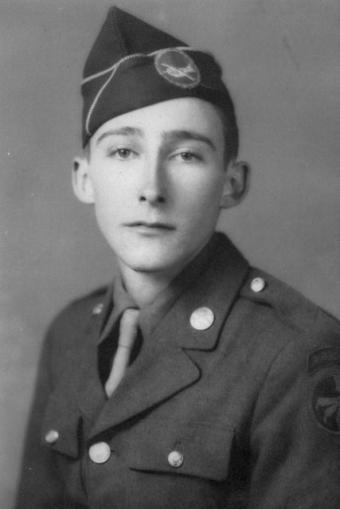 Private First Class Garold Dewayne Tidball was drafted soon after turning 18 and entered the service in April of 1943.  He was assigned to the Glider Infantry Unit, 101st Airborne Division.  Early in January of 1945, his squadron flew over and landed in the Ardennes Region of France.  Garold was hit by shrapnel and killed instantly on that, his first day of battle—a battle we now remember as "The Battle of the Bulge."  He was 19 years and 10 months old.

Garold was born on a farm in Butler County; his parents were Louis and Grace Tidball.  He was the fourth of six children to survive past infancy.  He was a kind and gentle boy who loved animals, but made himself hunt rabbits during the Depression years to supplement the family meals.

Our debt to the heroic men…in the service of our country can never be repaid.  They have earned our undying gratitude.  America will never forget their sacrifices.—Inscription at the World War II Memorial, Washington DC

The battle that took the life of Private First Class Tidball  is known to the general public simply as the Battle of the Bulge.

Germany’s planned goal for their "Ardennes Offensive" had been to split the British and American Allied line in half and force the Western Allies to negotiate a peace treaty in the Axis Powers’ favor.

The offensive did indeed catch the Allies by surprise.

But the German objectives for the offensive were not realized. And in the wake of the defeat, many experienced German units were left severely depleted of men and equipment, as survivors retreated to the defences of the Siegfried Line.

With over 800,000 men committed and over 19,000 killed, the Battle of the Bulge became the single biggest and bloodiest battle that American forces experienced in World War II.